Well been back at work for a week.  What a week it has been.  Staff and patients glad to see me back but sad not elected.  A pile of paperwork, e-mails and managerial jobs were waiting for me.  Then Mon/Tues three deaths, they say they come in threes.  The first one of my RCN stewards, the second I hear about in a Trust wide e-mail colleague from work and the third a partner of a work colleague.  She rings me at home and we talk for almost an hour.  So that is three funerals coming up.

Just got back in from seeing the work colleague who is presenting her usual persona.  Could be a front or just that she is trying to cope with the situation.  Took flowers and cakes, her work collegaues took somethign a little stronger BUT I was good and resisted.  Just had coffee, lots of it and we talked.  Well joked a lot, things like pads for older ladies and who wears the trousers.  The rest is far too rude for this blog.

Before seeing her I went to my parents to check they were alright.  There I met “Florence”, much to the disgruntlement of my daughters, because they had hoped to see her first.  One really dissappointed because she was in Nottingham, the other was round Grandad’s within 15 minutes.  Never seen her move so fast!!!  “Florence” is my new niece.  Now here we digress for a moment into dreams.  If ever you thought dreams were just that think on this.  I woke up a few weeks ago and told my wife that my sister’s child (she was still pregnant at the time) was going to be a girl and would be called “Florence”.  Well I was 50% right she had a girl.  But it could be argued that I had a 50/50 chance of being right anyway.  But the name “Florence” well that was wide of the mark.  Not that wide of the mark because my sister did not go with the celebrity names of wines, or fruit or animals.  Nor did she go with the more usual names e.g. Paula, Mary, Jane, Susan.  What I do find from the internet is that she has chosen a name of English origin and one that is rising up the popularity stakes.  As for “Florence” well like all babies she is adorable, knows how to cry, but goes to sleep for Uncle David.  And “Florence” as a name well that is Latin in derivation and means ‘in bloom’.  With 34 varient forms I bet mum is glad my dream did not come up with “Fiorenza”

I am sat here at 07:16 a.m. having woken about an hour ago unable to sleep.  Thoughts buzzing through my head.  So why not share them with the www.  Good morning – or if you are elsewhere than in the constituency good day.  The last few days have shifted the campaign in Sleaford and North Hykeham from an open competition to a 2 horse race.  A race between me, the local Liberal Democrat and the London Tory.  Sunday night at St. Denys Church set out two clear camps.  The local candidate who, if elected, has committed himself to being a full time Member of Parliament.  I have promised that I will be spending time in both the House of Commons and the constituency.  The other camp is the London Tory who clearly believes he can continue to work and his contacts as a barrister will give him an understanding of the people of Sleaford and North Hykeham.  I totally disagree.

Waiting for a bus in Timberland

For the past 20 years we have had a Tory barrister as our MP and it has not brought funding or prosperity to the constituency.  We have had 13 years of Labour and before that 18 years of Tory rule yet we still have dreadful infrastructure, poor public transport and lack affordable housing.  The average local wage is just over £17,500.  Even at 4 times salary that only gives £70,000 as a mortgage.  So with 2 bedroomed houses starting at around £100,000 that is a £30,000 shortfall.

I have made made my personal promise to the constituency as a whole but in particular to groups that have come up to me in during the campaign including, Bonner House Campaigners, Nocton Dairy campaigners, villagers in the west of constituency affected by lorries, the Scouts in Sleaford, some teachers in both senior and one junior school to be a full time MP.  To be able to work with these people I need people in Sleaford and North Hykeham to take that leap of faith and vote for me on Thursday.

Being a Member of Parliament must be your full time job.  Keeping up to date with issues and matters is achieved by being in the constituency on a weekly basis, coming home and meeting people not just being a weekend visitor.  The sign of a good MP is not where he lives whether that being a duck house with a moat or semi-detached house with a shared drive but that he is able to related to people of all strata of society on a regular basis.  Living in London does not, in my opinion, meet that criteria.

As we move into the last two full days of campaigning the rising sun gives me hope that I can continue to get out and about meeting people and asking people to support me on Thursday.  I know many have already voted using the postal vote system and it is very heartening to know so many have 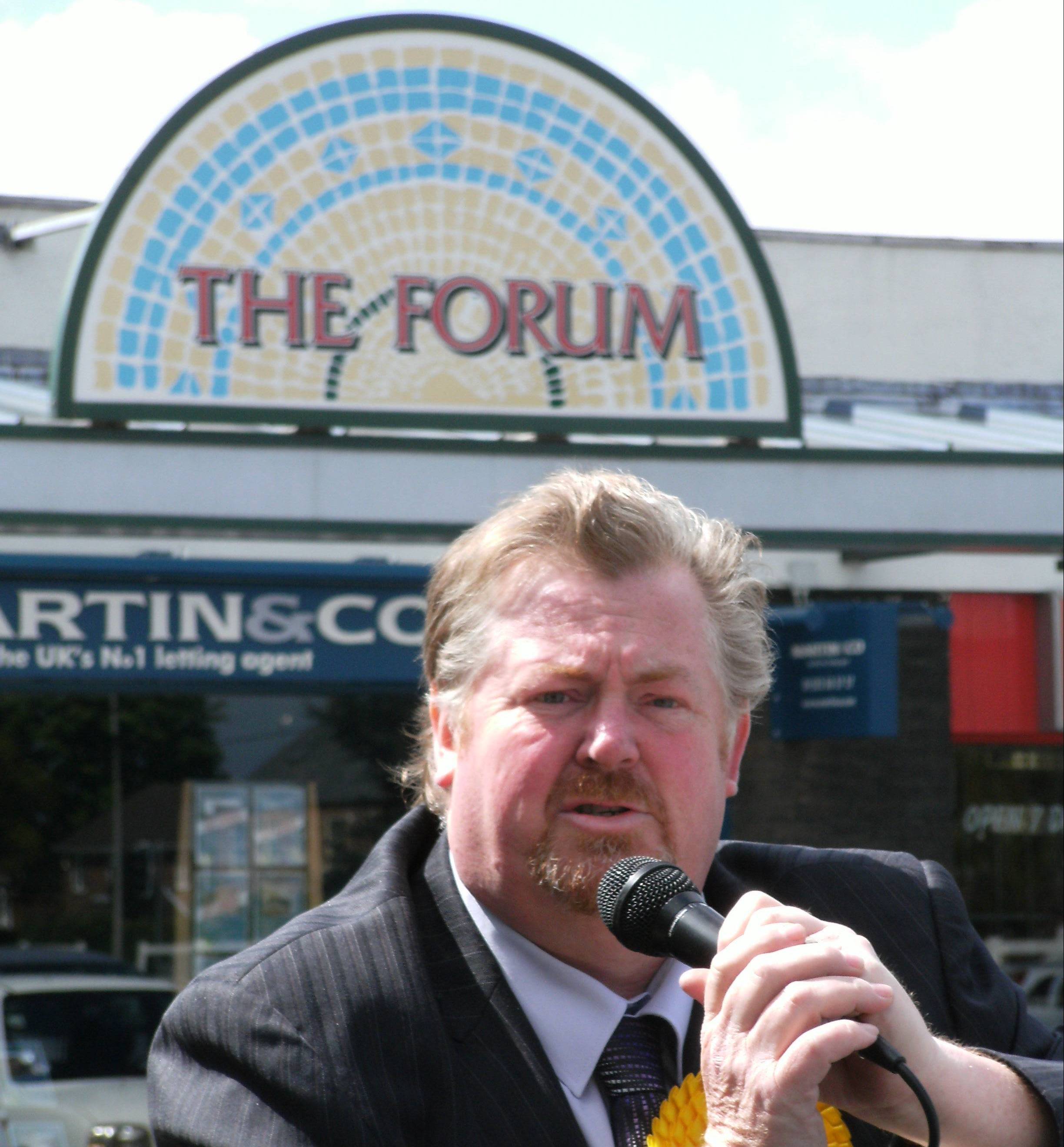 voted for me.  People came up to me at the Sleaford Market on Saturday to tell me they had voted for me or were going to do so.  The same happened on Monday in the Forum in North Hykeham.  The message they are giving is that they want a positive change and want it locally as well as nationally.

People are talking about the Liberal Democrats pledges and policies.  Our pledge on fair taxation that will result in many families being better off paying no tax on the first £10,000 of their income.  Our pledge on fair chances so that every child  gets the individual attention they need for by example cutting class sizes.  Our pledge on a fair future whch will create jobs by making Britain greener and will break up the banks and get them lending again so we can build a decent infrastructure here in Sleaford and North Hykeham.  Our last pledge is to clean up politics.  As a nurse I believe I can offer you that.  Moreover as a nurse you already have a level of trust that we together can build on.

I close to the strains of Louis Armstrong’s Wonderful World coming from my cd player.  It really can be if  we move forward together.

On Thursday (6th of May) I hope that the people of Sleaford and North Hykeham will have the confidence in me as the local candidate to support me to become the next Member of Parliament for the constituency.  So that together we can a real positive change.  So take that leap of faith and vote for your future, your children’s future, your grandchildren’s future, vote for the Liberal Demorats. 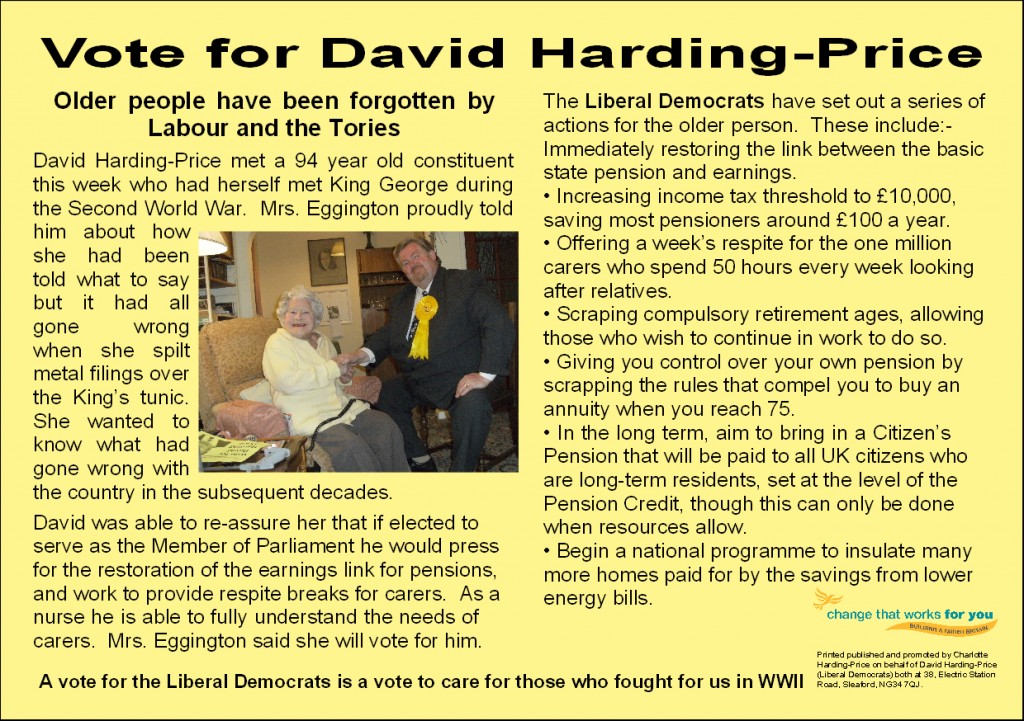 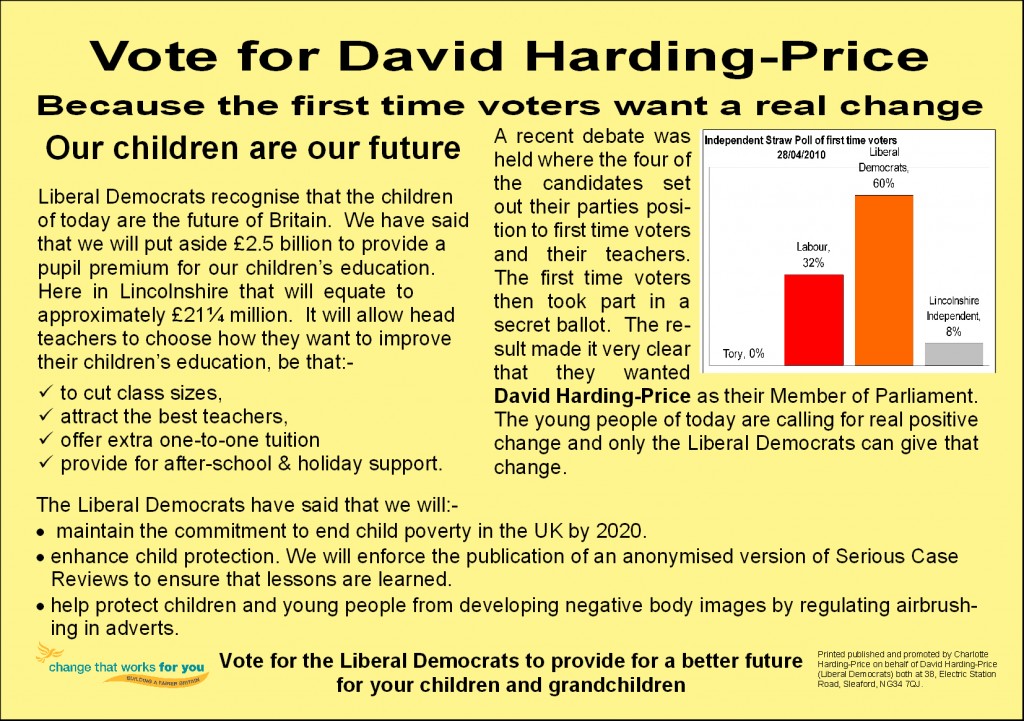