One has to ask the question are some people really fit to be parents.  Having just walked back from town I stood at a busy junction, where snow and ice lay on the ground.  I pressed the button to stop the traffic and be able to safely cross the road.  O 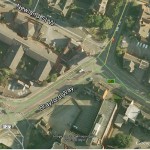 n the other side of the junction were two young mothers with two prams and four children under the age of five on foot. [I am stood on corner of Brayford Way and A57; they are stood on corner of A57 and road opposite Brayford Way, called The Avenue].  The traffic flow in the area is slightly complex in that the traffic on Brayford Way is three lanes one way and two lanes the other.  On the three lane side there is a filter on the left hand lane up The Avenue to where the red vehicle is.  To add to the situation there are currently road works on The Avenue so stopping vehicles coming down The Avenue, which is an incline away from the A57.  Right so you now have the picture; add to this there are a few other people stood at the junction also waiting for the green man.  We have cars stationary in the right and middle lane of Bradford Way but moving in the left hand lane when suddenly with a gap of no more than thirty yards in the traffic these two young mothers start to cross the road, pushing their prams and the children on foot following behind.  Needless to say as a car came onto Brayford Way in the left hand lane as it reached the junction suddenly found two of the young children, who were straggling behind their mothers, in the middle of the road.  Fortunately the driver was able to stop and sound the horn of the vehicle.  At this point one of the mothers realised two of the children had not crossed the road and remonstrates with the driver.  Why were two of the children so slow you may ask?  Though I guess you might also be asking why the devil did the mothers cross the road in the first place and not wait for the green

man.  Anyway the reason the two children were straggling was that in the road works was a cuddly toy.  This was retrieved by a gentleman walking down the Avenue.  But then to compound the matter one of the mothers runs back across the road to collect the toy again forcing another car to take evasive action.

So why do I tell this story.  Well it is very worrying that in modern society we appear to have a number of people who think that everything revolves around them.  So rather than waiting a few more seconds for the green man these two mothers put their children’s lives at risk.  Working, I presume, on the assumption that any vehicle coming towards them will stop or they would beat it across the road.  Imagine if the vehicle had been a 40 ton lorry and it had hit ice on the road rather than a family size car.  As it turned out the mothers did beat the car across the road but two of their children did not.  It was only either good fortune or the skill of the driver that a serious accident was avoided.  However, worse, it can be argued what was the message they have given their children “that it is acceptable to cross the road without waiting for the green man”.

At this point one has to consider are these two women fit to be mothers and why is it they either are willing to take the risk or cannot see the risk they put their children in.  I believe modern society has lost the art of parenthood for many people.  Why because it has become all too easy to put a child with the electronic nanny and this allows the parents to concentrate on themselves rather than bringing up their children.  Electronic nannies; be that the television or computer games; do not have any morals.  They are all driven by profit.  They put the responsibility on the adult to limit a child’s access to them.  However, if the adult’s moral compass is either spinning wildly or pointing in the wrong direction how can they possibly know what is the most beneficial decision for their child.  Further more and more children today have a television, computer, and other electronic gadgets in their bedrooms – so further cutting them off from their parents.

Research for the Literacy Trust in 2004 showed that young children who watch too much television have impaired language development.  Not surprising when programmes like “tellitubbies” are being produced. Interestingly the research by Dr. Robin Close [http://www.literacytrust.org.uk/assets/0000/0429/TV_early_years_2004.pdf] further suggested children watched more television in poorer families where parents had little education.  The research also does not recommend television for children age two or younger and for older children no more than one to two hours of educational [and I stress the word educational], non-violent programmes per day.

In Great Britain there are over 16 television channels dedicated to pushing out non-educational programmes to children.  However, in the USA; and rarely would anyone cite the USA of doing something right; where there are many more channels aimed at children Congress passed a law as far back as 1990 that required all television companies to produce three hours a week of “core” programmes.  Core programmes being of educational standard and with limited commercials and a clear demarcation between programme and advert.  Highlighting web links is also limited. Admittedly there are still some parents who use the electronic nanny but at least the children are then “forced” to watch something of educational value.  Here in Great Britain we have had commercials about road safety but it appears that in the case of these two young mothers that information failed to lodge in their brains.

As a society have we lost the art of communication?  Is everything so focused on the “meism” culture that young parents no longer are able to talk through how to bring up children with their parents?  Is society

so splintered that turning to grandma or granddad and getting advice and support is not possible.  I believe it is time we cut down on the likes of the electronic nannies and started to spend on purposeful and practical pastime facilities.  We have all heard about the “hockey mum” and seen what she does.  Whilst I am not suggesting that only mothers put the interests of their family, and most importantly their children, ahead of her own we do need families where mum AND dad spend time with their children doing things that have no meaning but are beneficial.  Whether that is playing in the park, going swimming, sitting around the table playing a board game or having a meal together WITHOUT the television being on.  Sadly modern society appears to believe that it can only function with an electronic devise telling them what to do.  Let’s hope there is not a power cut because far too many people, young and old alike, in modern society will not know what to do.