On Thursday evening I joined about 300 other people in the Drill Hall in Lincoln for the BBC programme Question Time. It was an interesting evening with much of the programme being about the High Street and Europe. However, before the programme was recorded there was a “dummy” question about obesity and food. As some-one who is not exactly skeletal in size the debate was of interest as were the various issues that were bounced around. One of the main ones was that in modern Britain parents could not get or afford nutritious meals when out and about resulting in their only option to go to the burger outlets. Points were made about how this should be seen as a treat and if family meals at home were nutritious then the occasional less healthy meal would not be a bad thing. The argument was then put that people today do not know how to produce a nutritious meal at home and some in the audience said they could not afford it. Weigh up the simple cost of a bag of crisps against the cost of any apple. The latter if eaten slowly takes longer and is more filling and now-a-days is often cheaper. Today (Saturday) I went out shopping for lunch tomorrow and for £4.50 got a chicken; vegetables for under a £2 and few other bits and pieces which with the various bits and bobs in my culinary cupboards at home will enable me to produce, in no small part thanks to the Hairy Bikers, a full roast along with a dessert. I also noticed that if I had just purchased the chicken breasts they would have cost me around six pounds. This makes the whole chicken cheaper in the long run because any left over meat will go to make a curry on Monday. Now I am no domestic goddess as the photograph 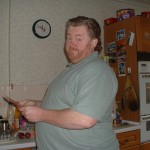 proves, also just because we had the kitchen done up does not make my cooking any better. However, it is very easy to produce a wholesome meal for a family of four for under a tenner. It is all down to education. This may well lead to howls and shrieks of I cannot afford a tenner I have to do it for under a fiver. This got me thinking. In my local co-op I asked the young lady serving the cost of 20 cigarettes at the same time I looked at the price of alcohol. Twenty cigarettes I was told are priced at over eight pounds and she even told me one company produces packets of one hundred for over thirty two pounds. So when a parent tells me that they cannot afford to spend a tenner in the local market or Lidls but they are stood there with a cigarette in their hands I have to ask exactly who are you kidding. Add to this I walk to my local co-op, good exercise for the dog (yeah right). If we are going to really address obesity then we need to address the way people see food. Trips to fast food outlets should be an infrequent treat not a daily occurrence. I have seen people using the local fast food emporium; just down the road where I live; as the place to get their Sunday main meal. We often have queues of cars spewing out of the drive through lane; blocking access to the rest of the shopping centre; full of children and waiting to buy yet another fast food to be eaten on the run. It is fairly obvious that this is not a treat but a way of life. Also often appears to be a way of silencing the children in the car. Cooking itself can be an experience for children. Imagine the sights and smells that mixing ingredients from scratch and how children can then make small changes to the basic recipe and still be healthy – substituting blackberries for raspberries or stuffing a lemon up the a*s* of a chicken. How can we expect a child to learn about good food and diet if the parents, who lead by example, head for McDonalds rather than make their own meals? When my children were young their treat was McDavids home made burgers into which all the ingredients were known, rather than a trip to McDonalds. No horse meat in those burgers. Also the burgers only had bread bases, the tops were open piled up with a variety of items – I wonder if that is where the Hairy Bikers got that idea from – then some salad or baked beans on the side add a few chips and hey presto a healthy fun meal. Matthew (when he was alive) used to make pizza and was proud of the fact that his veggie sister would eat it because one side was veggie and the other carnivore based. Try buying that in a shop and knowing what has gone into it. He learned those skills from school and being allowed to experiment in the kitchen at home. Both his sisters can cook and produce different styles of meals but which are wonderful. Lunch recently with one of my daughters was home made soup, using she told me the remains of her vegetable box, and home made fresh bread. She makes bread much better than me. As I freely admit I am not threadlike in physique but I do ensure I get fresh fruit and vegetables meeting my five recommended portions a day. I have cut down on things like pork pies – oh I so miss them – and cakes. It may not result in me becoming skinny but I have found I am saving money and I am told I am looking healthier. But more importantly I enjoy the cooking. The 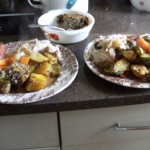 kitchen is becoming my domain. Admittedly it gets me out of the washing up. I get pleasure 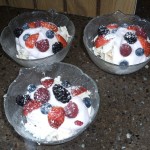 for seeing empty plates and hearing comments as people come into the house – “oh something smells good”. Now tell me does the meal in the photographs not set you taste buds alive and it cost me less than a tenner.